07 Jul In conversation with Malcolm

I recently had the privilege of speaking with Malcolm Orgee, a 54 year old in full time employment with a young family. Malcolm is one of the people affected by cancer that our independent advocacy service supports.

After suffering frequent and disabling headaches for six years Malcolm was finally diagnosed with CLL, Chronic Lymphocytic Leukaemia in January 2013. Malcolm remembers the day of his diagnosis vividly, describing to me the weather, cold clear snowy day, the drive to hospital and conversation with his consultant. He was told he had probably had CLL for six years and given a prognosis of a further seven years.

Malcolm described the news as being an ‘absolute bombshell’. His immediate thoughts turned to his family, his partner and two young children. How was he to tell them?

Thankfully they proved to be very supportive, however living with this condition meant he did not want this to dominate family life, he recognised he needed support from outside his family.

Many people are affected in this way, they have a strong urge to protect family members from the worst of their fears and concerns and often need to share these with someone outside the family.

After many tests and visits to Dorset County Hospital he asked his nurse if there was any support available for him. He was told no not really, he didn’t feel the nurse was very effective. Eventually he called Macmillan Cancer Support who gave him the number of the Cancer Older People Advocacy service at Help & Care Bournemouth. 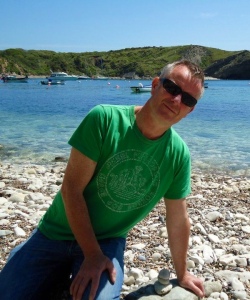 Six months after his diagnosis Malcolm was introduced to Bob Smith. Bob was to become Malcolm’s advocate. The advocacy service go to great pains to match people needing support with Advocates who themselves have had similar cancer experiences. Bob had previously had Mantle Cell Lymphoma and was able to understand Malcolm’s condition from the word go.

Malcolm was struggling with the bewildering array of information relating to his condition and trying to cope with the emotional effects of his diagnosis whilst grappling with the need to inform his employer of his new situation.

Malcolm works as a Head Gardener on a private estate in Dorset, he loves his work and wants to maintain his position. He is thankful he has supportive colleagues and employers. Nonetheless he has concerns as to what the future might bring for himself and his family.

LMalcolm was placed on a ‘watch and wait’ programme, meaning no immediate treatment was offered. This proved difficult for some members of his family to understand, particularly his elderly mother who constantly asks Malcolm when he is going to be offered treatment.
Malcolm finds it difficult to have to repeatedly explain the ‘watch and wait programme’ to his 81 year old Mum.

For two and a half years Malcolm has lived with quarterly hospital visits, monitoring his condition. For two of these years he has been supported by Bob, an Independent Peer Advocate. Bob has been there for Malcolm whenever he has needed him.

Asked to describe his advocacy support to me Malcolm said “I have been massively supported by Bob, he understands my cancer as his own cancer has many parallels. Bob knows what I am going through and has been there for me every step of the way. He understands all the emotional ups and downs, the complexity of my cancer, the day to day practicalities I live with, the whole scenario”.

He also told me he is constantly amazed by Bob’s dedication, always being there for me, particularly as Bob is a volunteer advocate

Malcolm feels this service is absolutely essential and should be available for all those who need it. He wishes he’d met Bob before he was diagnosed for then he would have had all the support he needed from the outset.

Malcolm recommends this highly personal and confidential service to all, he knows he would not have managed so well without Bob’s support.

I am deeply grateful to Bob Smith and all our wonderfully dedicated volunteers. They freely give not only their time, but bring valuable personal experience of their own to share with and inform their relationship with all those they support.

Bob like his many colleagues has spent a lot of time in training, and being supported by professional paid advocates. He has also contributed to the volunteer team’s experience helping to make our Dorset Advocacy Service one in which we can be very proud.

I’d like to offer my personal thanks to Malcolm for sharing his story, he understands our need to capture his and other’s such stories in our attempts to convince others of the value of our work to those who desperately need advocacy support.