14 Jun I will be able to concentrate on getting well…

Posted at 13:19h in OPAAL by SPAC Advocacy 0 Comments
0 Likes

With Carers Week underway we thought it might be useful not only to acknowledge and appreciate the support carers provide but also to recognise that sometimes its the carer themselves who get a diagnosis of cancer.

Caring responsibilities can be exhausting enough but imagine the additional strain of a new diagnosis. That’s exactly what happened to John and I recount his story from our Every Step of the Way publication here:

“My name is John. I was born in 1953. I live with my wife who is the same age as me, in fact, we are only a month apart in age. We live in a suburb of a town. I have been a carer to my wife since she had a stroke when she was in her 30’s. That was a terrible thing to happen to someone so young. It left her unable to read or write and her speech is very difficult to understand.

At the beginning of September of 2013 I was diagnosed with cancer of the oesophagus. For the next few weeks I didn’t receive any prognosis or treatment for this condition. I was told that I would be told what was wrong with
me at an appointment with the Consultant due in mid-October at the hospital.

I went to that appointment with my wife. I was told that I had a terminal cancer of the throat. I went quite numb. However, my wife wasn’t convinced. She had been a nurse and some of the things that were being said to me were not quite ringing true with her. She tried to explain her feeling to the nurse on reception but she just turned her eyes up. My wife noticed that there were 2 appointments for Smith on the same day.

I was very upset by the news and couldn’t think straight. My wife was doing the best she could but her own problems were not helping her. One day the Stroke Association home visitor called. She told us about the cancer advocacy
service and said that she would make a referral to them. This she did. In the meantime the Doctors did realise that they had told me some of the wrong information. I am not clear how this happened. However, my prognosis had
changed and they were now saying that my cancer was not necessarily terminal. 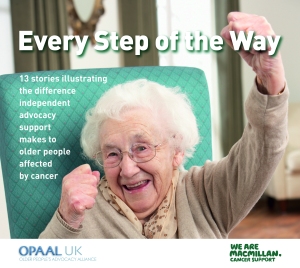 Richard called to see me quite soon after that. He was an advocate. I explained my position to him. I told him that I suffered from asbestosis and emphysema and that the Doctors were saying that an operation may not be possible
as the Doctors were concerned about the effects that an anaesthetic may have on my lungs and kidneys.
I told Richard all about my problems and those of my wife. I was feeling a little better about things as now there was a ray of hope. I had another appointment coming up and would contact Richard after I had been seen.

I went to see the consultant again in November. They said that I could go into hospital for an operation. I am now in the hospital, but, unfortunately, the site of the operation has become infected and it looks like I will be here for some time.

My wife does visit me but it’s a very difficult journey for her as it’s a long way to go. She does drive but doesn’t find it easy. We have a great deal of problem with communication because I have had a tracheostomy.
I didn’t manage to get around to telling Richard that I was going into hospital before I went. I had told him that I would let him know what was happening but things moved very quickly and I didn’t get back to him.

My wife has found it increasingly difficult to deal with things at home. She seems to be getting letters from the hospital that didn’t make any sense. This was particularly difficult due to her communication problems. She can’t pick up the phone and easily have a conversation with someone. She began to wonder if they were still mixing me up with someone else. She has also had letters from the benefits department asking me to make an appointment to see if I am still eligible for benefits. She can’t deal with this at all.

However, the good news is that Richard had been made aware of my current position. He has contacted my wife and is going to go and see her this week and help her sort things out. That will be a great weight off my mind. I will be able to concentrate on getting well and not worrying about her and what’s going on at home.

The help from the cancer advocacy service is for people ‘affected’ by cancer and not just those that have it. Richard’s input is of great help. He understands my wife’s condition and makes allowances for her communication problems.
I don’t know how long I will be in hospital but I am very reassured that Richard is going to help at home.”